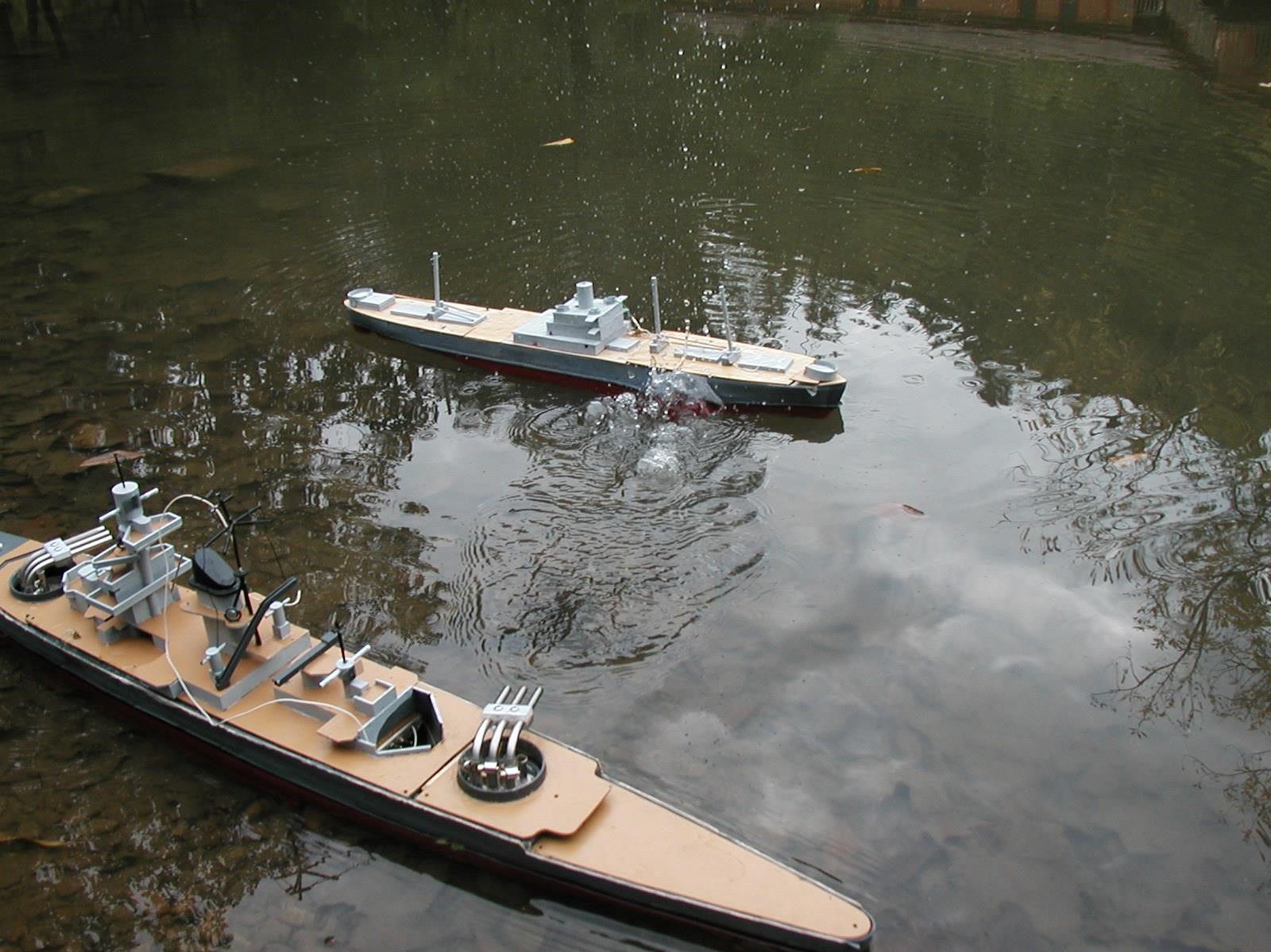 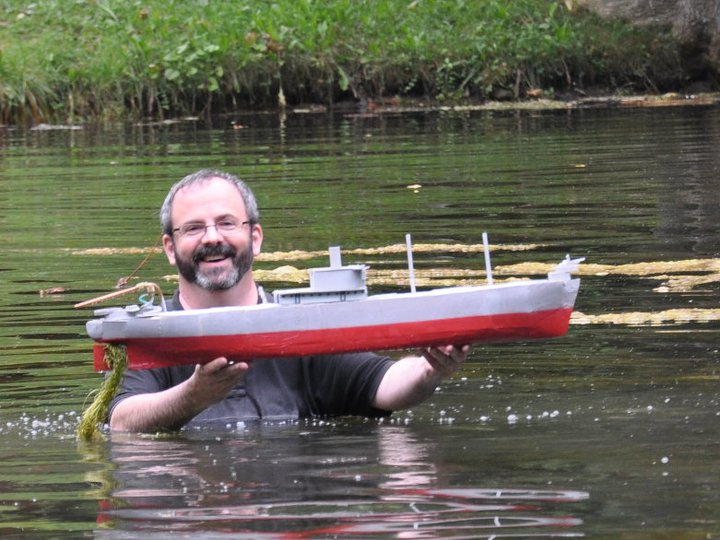 The ships are recovered from their watery graves after sinking.

Some ships need less help than others returning to port.

We are a Big Guns R/C Warship combat club with members in Virginia and the surrounding states. The Mid-Atlantic Battle Group (MABG) was called the Blacksburg Battle Group in the 1990s. The name was changed to reflect the broader geographical area its members came from. Some of our original members from the 1990s are still active in the club today.

Our members have diverse backgrounds. Some of us came into this hobby from a passion for the history of the ships we model. Other members are passionate about the electronics to control the ships. One member even makes their own ship cannons.

Simply put, we build remove control (R/C) warship models, arm them with CO2 powered cannons, and sink each other in hotly contested battles. Yes, the cannons really do punch holes in the ships. Yes. the ships really do sink. However, the ships are designed for this type of abuse and are easily recovered and repaired.

Any surface warship that was laid down or served between 1900 and 1945 is allowed. 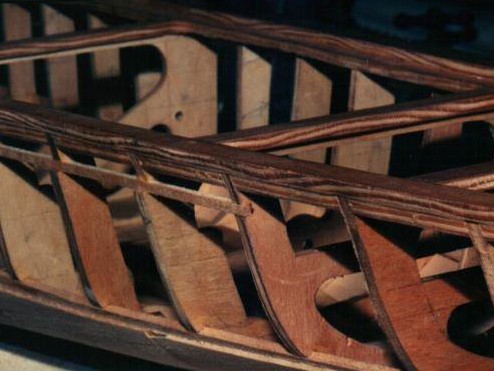 Most people use commercially available fiberglass hulls. However, scratch-built is nice too! 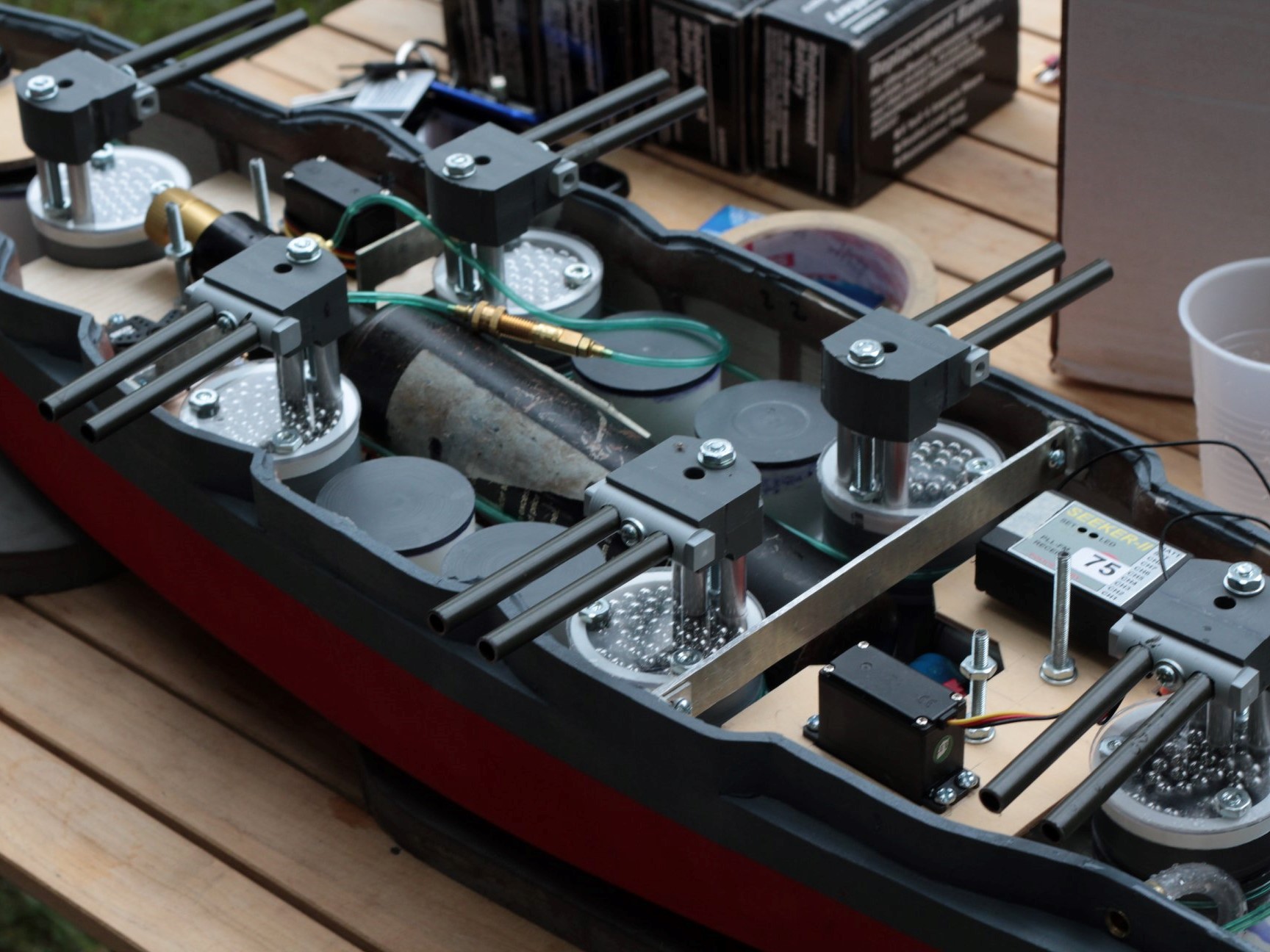 You can model however many of the historical ships cannons as you can fit!

Our remote control (R/C) warships are scale models of historical ships. We allow models of any surface warship that was laid down or in active service between January 1, 1900 and December 25, 1945. We only allow ships whose construction at least started to be modeled. Designs that only existed on paper are prohibited.

The ship models are built at a scale of 1:144. This is a scale were one inch in the model represents twelve feet on the historical ship. To allow for various builder skill levels we allow a +/-5% tollerance for honest build mistakes. Our rules also allow for some changes in scale to make smaller ships easier to build.

All ships have a maximum scale speed which is based on the maximum speed of the historical ship being modeled. Similarly, the model ships can be armed with CO2 powered cannons to model any 3"+ cannon on the historical ship. The caliber of these CO2 powered cannons is based on the caliber of the gun being modeled. For example, CO2 cannons arming an Iowa class battleship fire 1/4" ball bearings while the destroyer sailing next to it would be firing BBs.

The rules require that the hull of the ship can be penetrated by the cannons we use. The rules also require that the ship then be able to flood with water and sink from that damage. Other parts of the ship, for example the superstructure, can generally be made out of whatever the modeler wants.